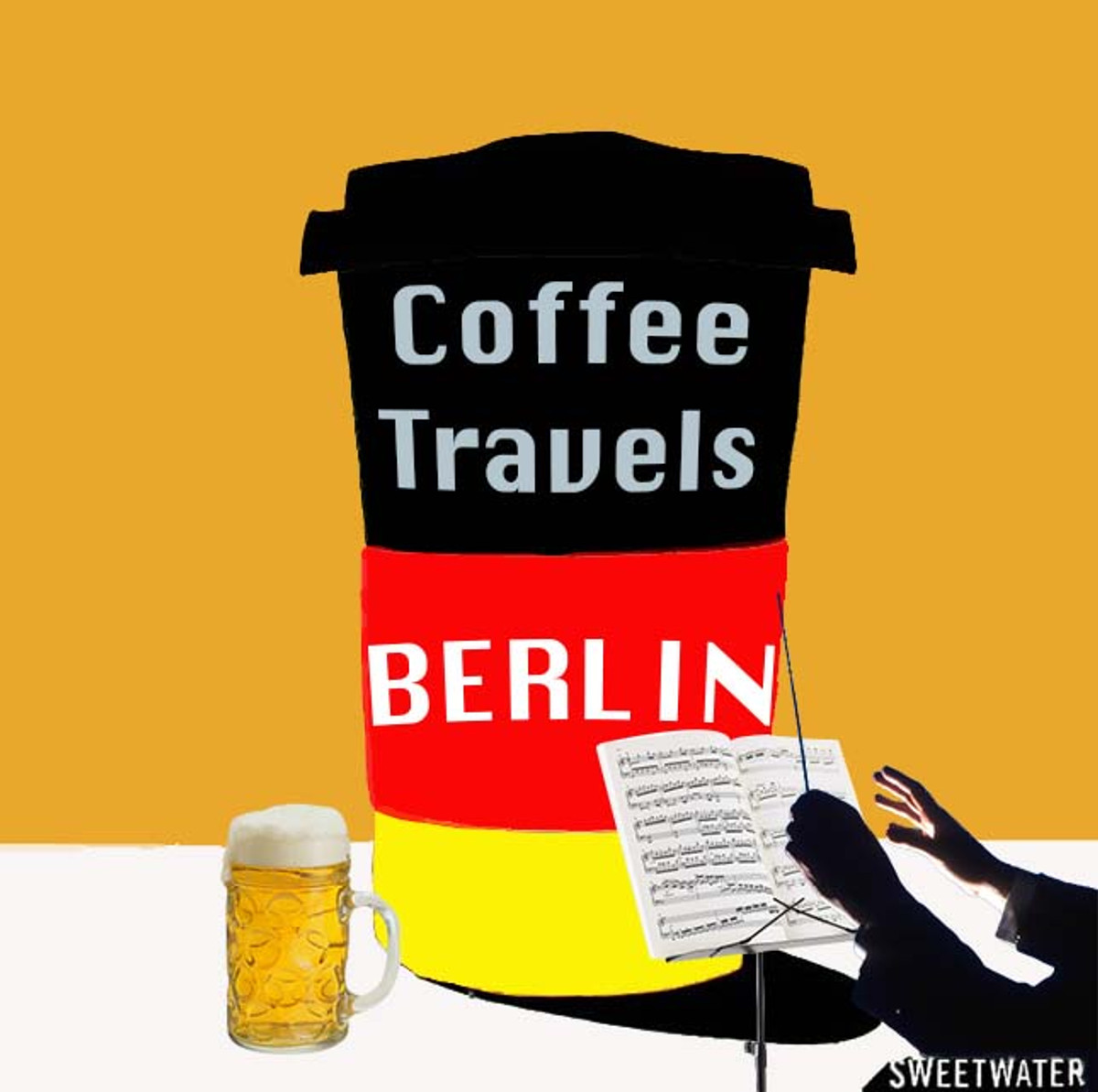 Some of our favorite coffee producers, including Yuri from Colombia’s Fondo Paez and Carlos and Miguel from Guatemala’s Manos Campesinos flew out for the grand weekend event, courtesy of Roasters United, a group based-off of the Cooperative Coffees business model.

“We kind of copied Co-op Coffees and made it in Europe,” she said. Nadine is also one of four roasters at Flying Roasters, which sources its beans through Roasters United. In June of this year, they were part of Roasters Village at World of Coffee. “Whenever we talk to people and explain what we do, they’re really interested in the idea. Also what I always like about World of Coffee - you have so many producers there!” 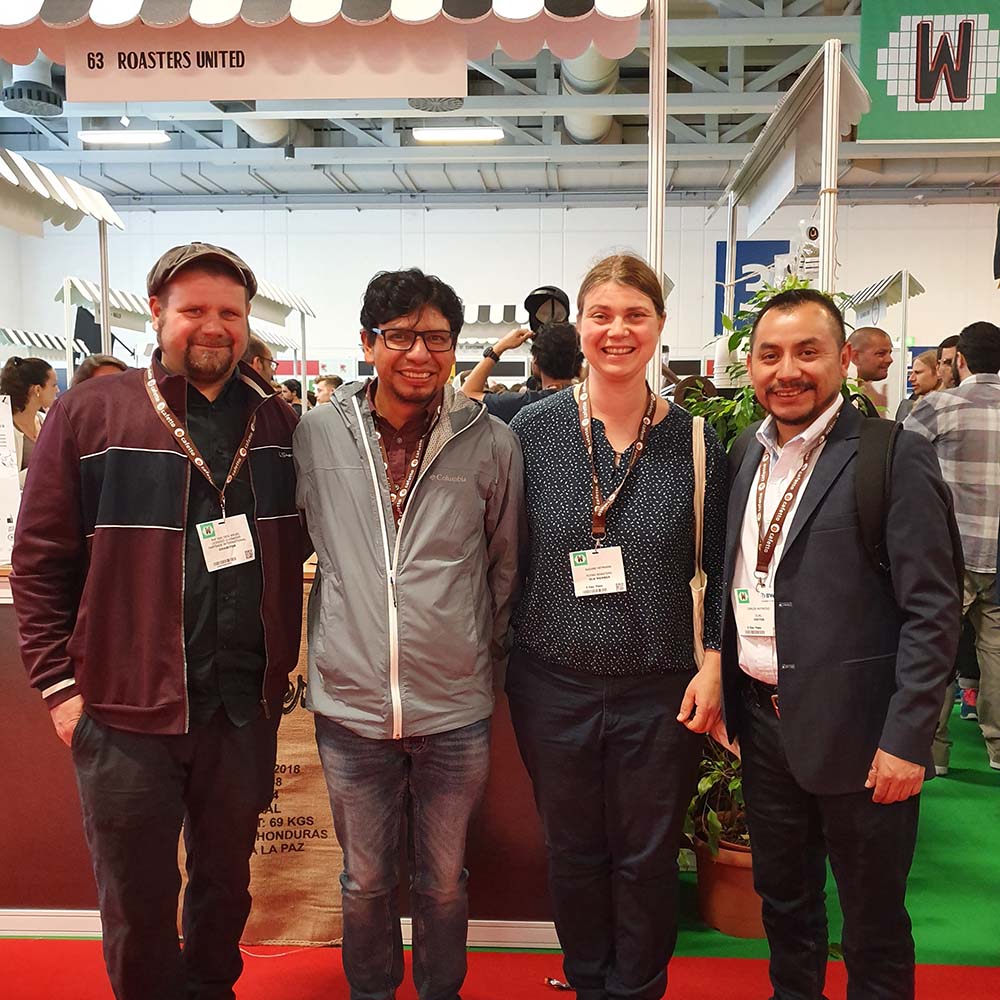 SCA Event Coordinator Philipp Reichel exhibited at WOC as the Berlin Coffee Festival, which he started six years ago. One big trend he noticed this year at WOC is automation and trying to minimize waste. Ubermilk - a pitcher of already steamed milk. A straight-in portafilter concept that can pull a shot of espresso that is always the same, without screwing it in from the side; everything becoming more and more digitized.

“The industry is focusing on the healthy side of the work environment and, of course, it’s all about storytelling,” Philipp said. “Design is off the roof, they’re defining themselves more and more through design. It’s crazy to see how much money is being invested into that.”

On top of being SCA Event Coordinator (a volunteer position) and running the Berlin Coffee Festival, Philipp started a cafe that became a roastery called Vote, and now runs a coffee shop and roastery called Isla, which he calls experimental. He helped the World of Coffee find ways to integrate the city of Berlin into the conference by providing printed local recommendations for visitors (A Guide To Berlin), and helping create an initiative for local coffee shops to hold events in their own spaces in conjunction with World of Coffee. He said when people attend conventions, they want to explore the city too, but there’s not always an opportunity to do so.

He likes to be up early at 5am to roast coffee at Isla right before sunrise when no one’s around.

“My roastery is located in a cafe, like a glass case of emotion, like an aquarium, and people love to show up and ask questions,” Reichel said. “That was the point: for people to show up and know who we are, but it also exhausts me to talk to so many people, so that’s why I get up early.”

While his morning routine in the glass case draws attention, most people in Germany today buy their coffee at sandwich shops along with their sandwich, getting a lower-quality coffee. Berlin’s coffee shop culture is really young, so the actual market in Germany is based on bakeries.

“They’re the ones selling most of the coffee all over Germany,” Philipp said. “People going to their jobs pick up a sandwich and pick up a quick coffee- a burned vending machine kind of coffee. That’s how the coffee culture is set up in Germany. They do go to coffeeshops but it’s not part of their everyday life. In London, it’s crazy to see how they don’t mind lining up in a cafe just to get their coffee and picking up their food elsewhere.”

Most won’t think of standing in line just for a coffee. Maybe 10 percent of coffee drinkers in Berlin would do such a thing says Nadine of Flying Roasters. (Here are all the cafes that carry their beans).

“We have a lot of specialty coffee shops and roasteries but the people who are really, really interested is just a small group, maybe ten percent of regular coffee drinkers, so it’s not that big,” Nadine said. “But we have a lot of good coffee shops. Most of the people are there because they like the coffee but they are not so interested in how it’s grown; they don’t try too much - we have some roasts that are more for average customers, not too light, stuff like that.”

Philipp said that for the small group of people who truly understand how the coffee supply chain works, they know the importance of sustainability and are working to find ways to get the message across to more consumers.

At Sweetwater, in an effort to help demystify worldwide coffee pricing (and ultimately raise prices for coffee farmers) we’ve joined a global group of importers and roasters that are making public the prices they pay for green coffee. The group includes a handful of roasters in Germany, including Flying Roasters in Berlin.  Companies took a "Transparency Pledge" earlier this month and announced their efforts via the website: Transparency.coffee.

“There are only a few roasters making coffee fully transparent and we have been working like this from the start five years ago,” Nadine said. “We publish a transparency report every year and publish all our contracts and roasting profiles so we’ve been transparent in our work anyway," she said.

It educates their customers about the supply chain and why they’re paying higher for coffee, and producers can compare prices and quantities.

“It’s a lot about trust and trust building,” she said. “Our customers can’t go to a coffee farm and see what’s going on, so they have to trust what we tell them about the co-ops we work with,” she said suggesting that business transparency helps deepen that trust.

Sustainability at the Coffee Shop-Level in Germany

Some people are so serious about reusability, they’re making coffee cups out of used coffee grounds.

“Climate change issues?” Philipp said. “I’m the owner of Isla with Peter and we started the cafe exactly because of these issues. Within our roasters, we are trying to communicate the idea that cow milk has a different carbon footprint that oat milk has.”

Nearly half his clientele takes oat milk with their espresso.

“The whole topic of takeaway is going well - it’s not necessary to take an espresso for takeaway,” he said, “or a discount where you bring your own coffee cup. I’m trying to avoid packaging as much as possible. Our wholesalers receive their coffee in bins, so we don’t create garbage. We even won some awards for being a circular economy cafe. Kaffeeform uses our coffee grounds to make coffee cups out of them. That’s circular economy at its best: take something that’s seen as garbage but isn’t garbage. There is no garbage. If you look at things, think if it’s really garbage.”

This year, Philipp is looking for fresh ideas beyond roasteries showing up and showcasing their products. This year, he is featuring the farmers. It’s not the roaster’s coffee, he said. It’s the farmer’s coffee.

“I’m so stoked! We’re doing the Berlin Batch, and the idea is as the Berlin Coffee Festival with the participating roasters, we’ll import the same coffee from farmers and they’re passed the same coffee, so we can underline the different ways to focus on their roast: more sweet, more acidic, more bitter,” he said. “Number two is this coffee will be imported with Cafe Imports, and they will make it completely transparent.”

They’ll show the coffee chain, the cost of what it takes to get the coffee from the farm-to-cup so consumers understand what it actually costs. They will pay the farmers’ flights and visit all the coffeeshops, so people can talk with farmers directly.

“There will be a focus on the farm aspect rather than beautiful cafes and roasters,” he said. “I’m really excited that we’re going to have Window To Farm. We’ll have a huge display, a monitor, that will live-stream from a farm in Colombia."  Berlin Coffee Festival attendees will be able to watch while coffee cherries are being harvested at teh farm, which Philipp hope will help people understand how much work goes in to producing coffee.

In addition to the coffee harvest, all festival speakers will be projected through big screens rather than in person.

Learn more about Philipp's farmer-focused Berlin Coffee Festival that will be held Oct. 1-6, 2019. 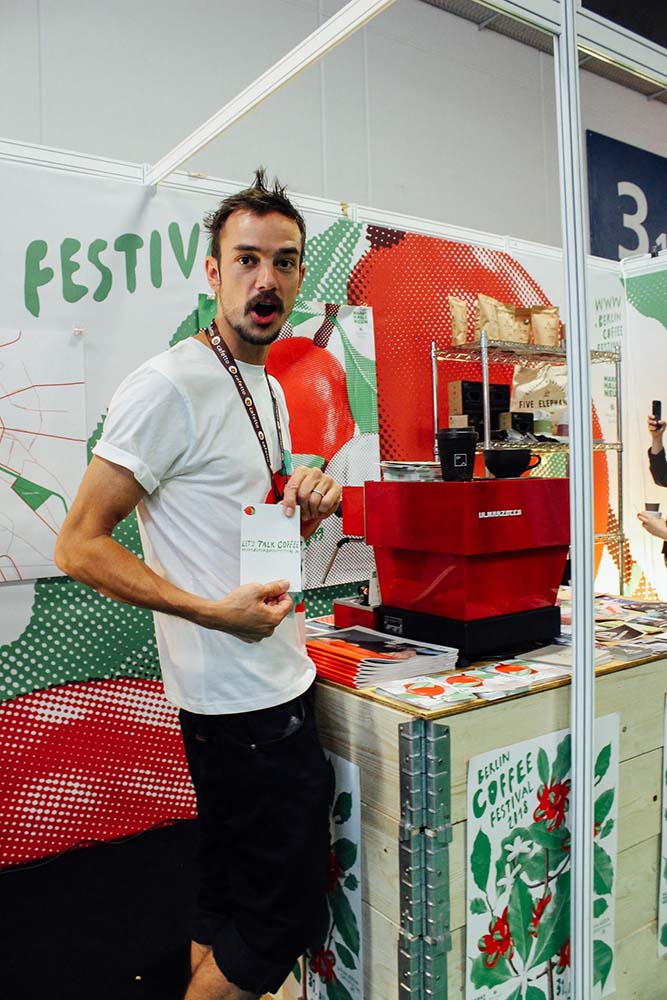