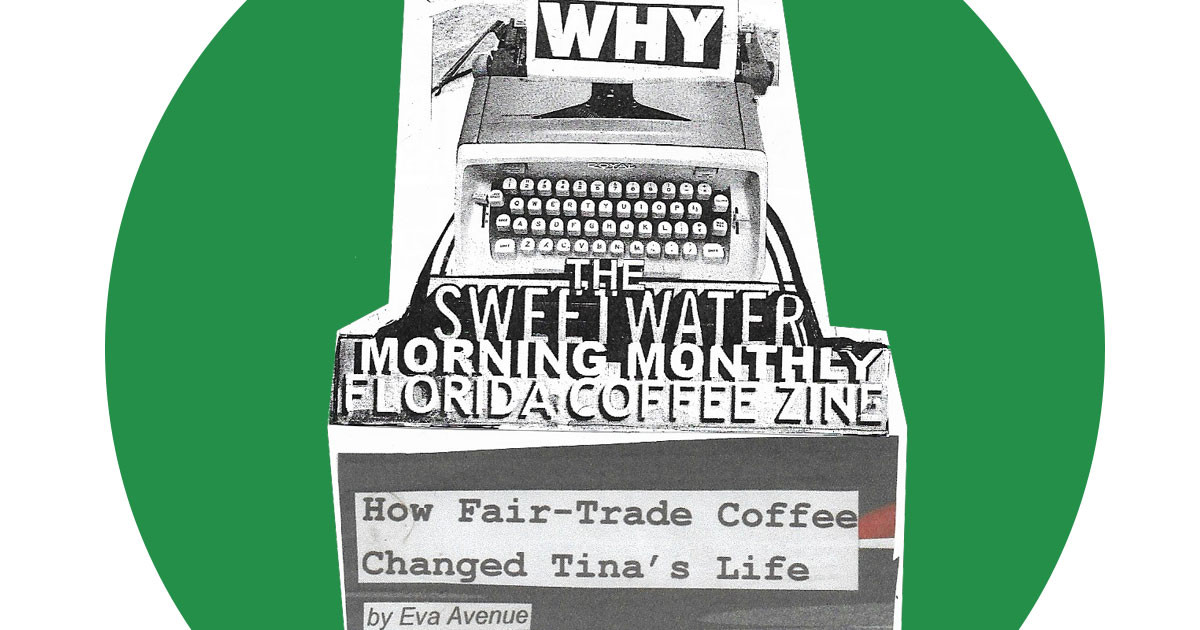 The more I work with people in the Fair Trade coffee production & distribution industry, I learn there's something deeper going on than simply pushing coffee beans. It seems to provide a dynamic and overall deeply satisfying emotional experience for everyone involve like they're interconnected by a vast tribal community sustained by a working business plan. Talking to Gainesville's intrepid tattooed traveler Tina from sales at Sweetwater Organic Coffee Company about how she dropped her plans to retire from another job in 2009 to go full-swing daily grind for the daily grind.

"It all started - my daughter had been working at Sweetwater Coffee for a few years before new ownership took place, she was working for the old owners at the farmers market, she would bring us a bag of coffee here and there. I was like, "what is this coffee?" Not having any idea of what it was. Bag of coffee, bag of coffee. When she started working there and Tripp bought it and I'd pick up my grandson, I started to become more aware of what is going on with coffee. A little bit, not much.

I had a shop in High Springs. The girl next to me, she was also serving Sweetwater. I was like, "What's Sweetwater? It's just coffee!" I didn't know. But I knew it was good.

Picking up her grandson from her daughter at Sweetwater, that's when she met Tripp, who oversaw operations.

"My plan was to become a full-time nanny - I was gonna quit my job and watch my grandson, that's what I wanted to do. I started going in there and they wanted me to do pictures for the website. I said, 'Oh man, I wanna work here, I wanna work here.' Not knowing why. I just wanted to work here, I thought it would be cool. In the meantime, Tripp was talking to Amanda, 'I think your mom would be a good fit. Do you think y'all could work together?' She said, 'We've lived together for 25 years, of course we could. '

"When I started working there I knew nothing about coffee. I gradually learned and I went to origin in Guatemala. Nobody can prepare you for the culture shock. But not even that, but the overwhelming emotional feeling that you get when you're walking with these farmers and they're telling you about all these beans and everything that goes into it - and the kids, they all work together. It changes your perspective, it changes how you look at coffee, it's a very labor-intensive process. When we left Guatemala, I wasn't ready to go. I was crying like a baby on the plane. I don't even consider it a job. It just makes you feel good to know that you're doing good."

Her favorite coffee is Sweetwater

"It's usually what I drink. I know where the coffee comes from firsthand, I know the story behind it, we've met the people, we've met the farmers. That's probably why I'm so biased. It's good coffee but we know when we get that bag of beans what's going on with it. How it's being handled, how it's being packaged. You know how long its been in that bag - if you pick up a bag of Folgers you're not really sure, you don't the story, you don't know where it came from, it's just ground coffee for the most part from something. It could say Colombia, but how are the farmers? Who did you get your coffee from? What's the story behind it?"

"I just think people should be more aware of what goes into bringing that great cup of Sweetwater to you. It's the personal relationships, it's the knowing the farmers and knowing that you're giving back to them and helping to improve their lives. Someone came in the other day and tried to bring down our price. I was like, 'Dude, we don't haggle about our coffee.'

"You can't just say well, will you go halves with me on it? I was like we don't do that with the farmers. You don't make a lot of money off of coffee, that's for sure."

"We did a bags-to-glasses program. That was the most amazing thing. We did the burlap sacks and people could buy, make a donation, buy however many bags they wanted so they went to a fund for reading glasses for our trading partners, we got almost 200 pairs of reading glasses. It's just that feeling. I have pictures of Tripp giving the president of the co-op in Guatemala the box of glasses."