How’s it going at Wunderland this summer?

I am currently in the parking lot at Wunderland. It’s been good, riding the roller coaster that is life these days, you know. There was definitely sort of a boom from post-lockdown and all the stimulus money and being getting their stimulus tattoos but its been up and down: you guys can go back to normal/ no, no, no. Normal has been very far away. Full spectrum.


When did you complete that can design?

A few months ago. Keeping track of time has been tricky too. The idea has evolved over time for that aesthetic. All those line drawings are how I design the tattoos that I do. Those tattoos are actually tattooed on people in town. It will be cool for some locals to go to the store and be like hey, I have that tattoo. At my tattoo room on Wunderland, the walls from floor to ceiling are covered from floor to ceiling like that, so the idea was to capture the feeling of Wunderland into can form.


And it looks like you painted coffee onto textured paper?


What have you noticed about can designs over the past decade? I feel like cans are now approached by designers like a t-shirt or an album cover.

I guess with the rise in, sort of, more niche stuff, more boutique artisanal approaches, small batch kind of stuff, eons out the door for more can experienced so I guess it has widened the variety. When it comes to more obscure labels, the average person is going for a flavor profile, is looking for a certain look or way. Judging a can by its cover. So a label is maybe becoming more than it ever has. 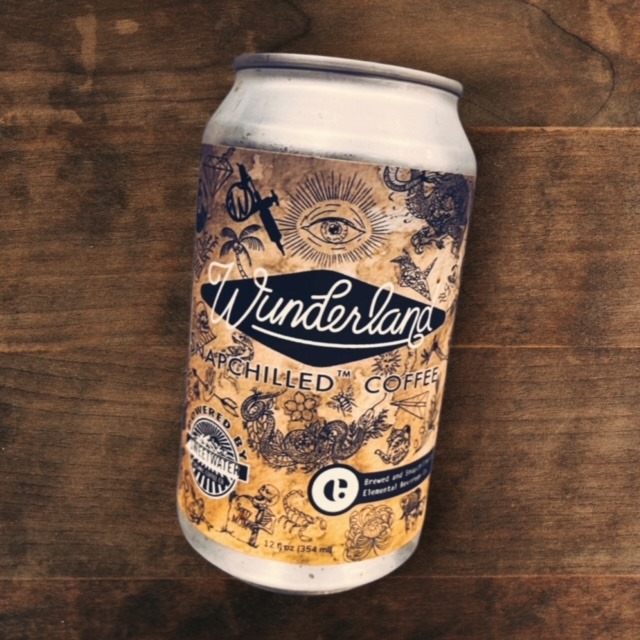 I love the dancing skeleton on the can, I've seen it used for other things before.

They’re from stills from an early animation cycle so there’s different phases of that dancing skeleton.... It’s from that image but re-rendered and tattooed on somebody in town.

On there is a mixed bag; there's classic designs that get covered over the years and some are iconic and known to be, 'ah - that’s Sailor Jerry or Cap Coleman.' Classic flash. If you know you know, call it an homage, call it traditional to what is supposed to be. Then there’s stuff that is a re-imagned version of what it’s supposed to be.

So on the can is all over the place, some are designs that I’ve drawn out of my head, some may be a classic Sailor design redone over and over again or - the crying baby - is off a classic design but gets altered and uniqued each time its done but there’s some stuff that’s personal request people wanted to get tattooed.

Did you try the snapchilled coffee yet?

I did. It’s great. I like it with a little bit of soy vanilla creamer and it is just right.